The inspection report from the city arrived last week.Â  Nothing too surprising: permits for the unpermitted work in the kitchen and the bathroom are necessary.Â  The kitchen needs about 6 more circuits pulled in from the breaker panel — this probably means needing a bigger panel.Â  Also, and this is the kicker, at least half of a kitchen’s lighting (by wattage) has to be fluorescent.Â  Right nowÂ there areÂ 8 or 10 4″ low voltage halogensÂ (on aÂ dimmer) around the perimeter that look really great when dimmed — to add the same amount of wattage in fluorescent would be an enormous (enormous!) fixture above the island.Â  So it’s back to the drawing board for the lighting in that room.Â  I’ve heard good things about fluorescents these days, so I’m not too concerned.

The lighting in the bathroom can stay incandescent,Â as long as a motion sensor isÂ installed.Â  Some of these codes are getting a little wacky if you ask me.Â  The bathroom will require opening a hole in the hallway for the plumbing inspector, and perhaps another hole down low in a different wall to show that the shower pan exists and is of the right material.Â  Which isn’t too bad, because I needed to hack into that wall for something else already.

TheÂ standard water heater installed in the garage needs about 10 things done to it (bollards to protect it from cars, straps to keep it from falling over, spacers to keep it away from the wall, the list goes on …) so I think I might just replace it withÂ a Tagaki tanklessÂ and be done with it.Â  I keep hearing how tankless is the way to go, anyway.Â  No running out of hot water!

Other items: many of the unit’s outlets are ungrounded and/or wired incorrectly.Â  Nothing too major.

I got an estimate from a contractor who’s done lots of condo conversions, so I feel likeÂ I’m in good hands.

As part of the condo conversion process, the city sent three inspectors to our building last week.Â  It took all of my strength to not follow them around and pester them, but I did notice quite a bit of writing in notebooks when they were in our unit.Â  I’m guessing that’s not a good sign.Â  We’ll know for sure when the report arrives in a week or two.Â  The worst case is havingÂ to rip out the bathroom or something …Â sounds like a fun project to me.

GoDaddy was able to snipe amusings.com for me.Â  I’m not sure exactly what I’m going to do with it yet, but I think it’s pretty cool that I was able to get it.Â  Maybe I’ll just squat it and one of the other blogs with the same name will pay me millions for it.

Attention JetBlue: There are unused icons on all of your flight status monitors in the Boston Airport.Â  I hear you might want to try the desktop cleanup wizard.

Or do you have your passengers help clean the desktops to keep costs down, just like how we help you clean up the cabin on descent?

Your in-flight DirectTV made up for it though — 8 episodes of COPS and 1 episode of The Reposessors made the flight back to Oakland go pretty quickly.

My techie readers are probably expecting a rant about GSM vs CDMA or Blu-ray vs HD-DVD, or even (to keep the blog theme) RSS vs Atom.Â  Instad, it seems the standards war now extends to an unlikely player: Pottery Barn.

It all started before Thankgiving when we boughtÂ Pottery Barn’sÂ Savannah headboard (without the footboard).Â  We didn’t get the Pottery Barn bedframe because Mattress Discounters (future rant: why is the mattress-buying processÂ just as bad as buying a used car?) said they’d throw one in with our mattress purchase.

Once the frame and headboard had both arrived, I went to connect the two.Â  Much to my surprise, the 4 holes in the metal frame matched only 1 of the 3 holes drilled in the headboard (the bottom-most one).Â Â  One bolt isn’t enough to stabilize a headboard.Â  I figured it was because we got a cheap-o bedframe that was probably a factory reject.Â  I didn’t like the freebie bedframe anyway, since it had small casters which would just marr the hardwood anyway.Â  So I ordered something from a small e-tailer so I could explain the problem on the phone to someone who (I hoped) would have some experience with exactly this issue.Â  The new frame I picked out had feet instead of wheels, which I wanted anyway to protect the floors.

When the frame arrived I had 2 surprises.Â  First, FedEx had ripped a small hole in the box, which turned out to be just big enough to let one of the 4 plastic feet fall out and disappear forever.Â  The second surprise is that the mounting holes were exactly like those in the freebie frame.Â  So even if I had all 4 feet, I was no farther ahead in my quest.

When all else fails, read the directions.Â  So I took aÂ quick look at the page of instructions that came with Pottery Barn’s headboard.Â  And there I had my answer.Â  The holes drilled in headboard didn’t match the illustration.Â  If it did match, everything would fit together properly.Â  So I had solved the mystery.Â  I called Pottery Barn and had them send another one.

2 weeks later, the delivery truck arrived with a new headboard.Â  And sadly, it was drilled just like the one I already had.Â  So I rejected the delivery, assuming that the overseas factory had accidentally drilled all million headboards incorrectly.

I did more research.Â  The instruction sheet showed the holes one way, but this Pottery Barn page describes the holes being drilled as they were on my headboard.Â  Which way is it supposed to be?Â  A trip to the mattress shop showed that all headboards there were drilled in theÂ “correct” style… so why did Pottery Barn insist on being non-standard?

IÂ calledÂ Pottery Barn’s customer service team and they insisted I need this adapter.Â  I had my doubts (it didn’t seem like it was going to solve a damn thing) and when it arrived I was right — despite its description, it doesn’t help at all if the frame and the headboard align properly but don’t connect.Â  Sigh.

Another grumpy call to Pottery Barn’s customer service team yielded a refund onÂ the adapter and a free Pottery Barn FrameÂ which suppedly will work.Â  I can’t wait to see where the holes are drilled on it.Â  Sadly, the Pottery BarnÂ frame has wheels (at least they are large, wideÂ wheels) instead of feet, but hopefully it solves my problem.Â  If not, I’ll just drill the hole where I need it in the headboard and be done with this mess. 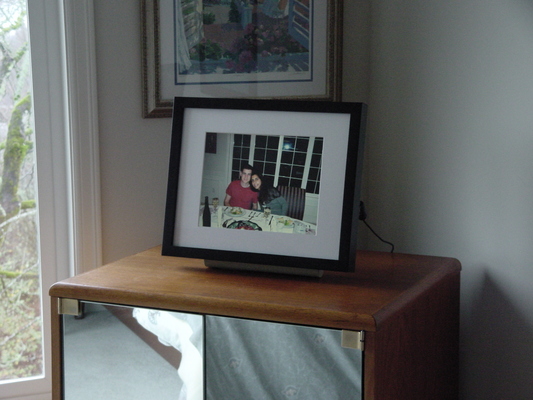 Now that they’ve all been delivered, I can unveil my latest project to my blog-reading public.Â  (This is a project blog, after all.)

I built two of the gadgets picturedÂ to the right.Â Â In a previous life, they were ancient Dell laptops.Â Â I dismantled the computers and then nicely re-mounted them in wooden picture frames.Â  I installed Linux and pieced together enough opensource software to produce a slide show on the screen.Â  I put wireless network cards in them, so they can automatically visit this website every so often and download new pictures to display.

I gave one to my mom for her birthday.

I wrote up a few pages on the construction process.Â  Check it out and build one of your own!

Saw this parked in the neighborhood yesterday. It’s not enough to just have a chauffeur for New Year’s Eve — the true safety-minded reveler only rides in this Volvo Limousine:

Knowing what a red-light-camera hater you are, and given that San Francisco is the most dangerous city in California for pedestrians (and one of the worst in the country), how would you like the state to enforce lawful behavior? (Iâ€™m assuming you agree there is a problem.)

This is an easy one: get rid of pedestrians! No pedestrians = no pedestrian accidents. Cars for everyone! Also, nowhere in the blogger’s credo does it say that criticism has to be constructive.

In all seriousness, I do agree that there is a problem with pedestrian deaths, especially in San Francisco. I would like to see the police running continual pedestrian stings, as described at WalkSF. (Great site, by the way — I love some of the fake tickets there.) Looks like this is an on-going program. I love a good sting operation, based on 18 years of COPS watching. (“132 and Bush, Iâ€™ve got him at gunpoint.â€ â€œOk, gunpoint, 132 and Bush. Covers code 3â€ ). Just an increased police ticket-writing presence in the mornings at major intersections could help things out. At $155-$371/ticket, the program can be self-supporting.

As I was thinking about Michael’s question on my drive home through the Mission district and the Castro (lots of pedestrian traffic), I got to thinking about what situations are (statistically) the most dangerous for pedestrians, in an attempt to answer the question “will red-light-running deterrents (camera or otherwise) significantly help reduce pedestrian deaths?” Are pedestrian-auto collisions caused by mostly by people racing yellow lights? Or, are pedestrians getting hit by inattentive right-or-left-turners on green lights? My gut told me inattentive drivers being careless on green lights was to blame, but I wanted to find more data. I found some interesting data here. There are quite a few interesting statistics in the report (watch out for S.F. native male Caucasian drivers age 40-64 on Tuesdays, Wednesdays and Thursdays).

While 78% of vehicles involved in a fatal pedestrian accident this report were continuing straight through the intersection, what’s missing is whether the driver had a green or red signal… if that’s even known (which I doubt). What is known is that the primary cause was a driver’s failure to yield to a pedestrian. This is the citation I would expect with a driver proceeding through a green light and striking a pedestrian still in the crosswalk, though it is also likely that this is a “catch-all” cause for all of the above.

Pedestrians take note, the report shows that 94% of the fatalities happened at night or while raining — or both. Pedestrian visibility is a huge factor. While it’s probably due to driver inattentiveness (or, actually, not being extra-attentive during non-daylight hours or during bad weather), pedestrians should be extra vigilent. The “Collision Narratives” section at the bottom is a detailed but especially crushing overview of 36 pedestrian deaths in 1997 and 1998.

I’m sure there are more reports (and probably ones that are more recent and on-point) on the subject, but reading one of these reports was enough for me. I get the sense that drivers are speeding more and generally driving much more impatiently now than in previous decades, especially since pedestrians are probably acting as they always have.

More to the point of Michael’s original question: I really don’t think that red light cameras will curb pedestrian deaths. Let’s have a lot of enforcement the old-fashioned way with uniformed police officers writing tickets. It makes a strong statement about pedestrian safety, and gets drivers to slow down and pay more attention even (especially!) on green lights. If attended cameras help the conviction rate, then I’m all for that. I’m just not OK with how the justice system considers a robot’s testimony (and only the robot’s testimony) to be infallible. (Hmm — I wonder if Asimov’s laws are on the books in California yet…)

Any “good” (as in business-minded, not benevolent) company tries hard to lobby the government to pass laws in their favor. It’s how business is done in this country, I suppose.

Check out this article.

It seems that when the government itself is running the nearly $10M/year business, no lobbyists are necessary — just get some court orders to protect the money supply and keep free speech at bay. Clearly the courthouse is no place for civil liberties.